It’s been a while since my last blog entry, so I wanted to play a bit of catch up on a recent derby event in Tasmania that I had always intended to write about. The Brisbane City Rollers sent their male team The Scartel to play us on May 10th, in Launceston. It was a significant event for both our team and roller derby in the state as it was the first mens bout to ever be played here. It was very special getting to finally show all our friends and family what we have been working so hard to build over the last 12 months. The night was a success and I think it’s safe to say the audience enjoyed themselves, there were big hits, FAST skaters and score girls with lollies. The Brawlers were lucky enough to come out with a victory and build some new friendships with the crew from Brisbane.

As a member of a new team and personally being a new player to the sport, there has been a learning curve and it has been steep, I would like to share some of my experiences, thoughts on the game and stories from the bench. When I attended The Nut Factory in 2013, I met several of the BCR players as their league were the event hosts. I had skated with several of them, however had no idea what to expect from them as a team. I had never seen them working together, nor had I heard anything about the away they played, all I knew was they had a lot of experience in their team, being the longest established co-ed league. Suffice to say, I didn’t know what to expect on bout night. I was confident in our team, we all put in so much time training and learning to work as a team. Many of us were making a very long drive each week just to make training. We also have some amazing skaters on our team and we knew they would put on a good performance. As the bout got closer I felt secure in the training we had put in, but still had no idea if we would come out with a win. Our game plan was to go in and not worry about their game, to play ours. We know from our first bout against Vanguard that when we let them control the pace of the game, we had nothing. So we really wanted to focus on playing our strong defensive game and work at controlling the opposing jammer and speed of the pack. This worked…. To an extent! We found that our strong defense allowed us to gain control of most jams, but The Scartel were able to drag the pack out and change the speed, leaving us responding to them.

The first half was reasonably even, we received lead jammer much more often, but The Scartel controlling the pack speed often meant our jams were low scoring and at half time were almost tied. In some ways we were relying too heavily on our main jammers ability and not providing enough of an assistance to them. We would focus on our defense until the opposing jammer got out and then we would proceed to get beaten up by The Scartel until the jam was called off. Our skaters were coming back to the bench with injuries. I recall looking at one of my team mates who had received a knock to the head, he appeared dazed and sat out several jams. Another skater had leg cramps while I personally injured my ankle. I think without the guidance of our excellent bench staff this situation could have easily turned against us. Leading into half time, our main jammers were beginning to feel this pressure, they were working very hard in the pack and not scoring many points, it was wearing them down. One approached me and said he needed help. At half time we discussed this and we all knew we had to change the pace of the game by offering our jammers active offense. Our jammers are fast, we had no concerns about speeding the pack up and we made the decision to start rushing into The Scartel blockers when our jammers approached the pack.

In the second half, our blockers became much more aggressive, I would personally skate into their walls and it was very effective. The Scartel responded by skating faster (usually separating their walls), dodging the hit or bracing against it, all of which created openings for our jammers to take. We were able to momentarily take their focus off our jammers and that is when the points began to shift heavily in our favor. Our jammers were skating through the pack and picking up their 4 points without much fuss. I think we were definitely putting too much work onto our jammers, our team has very strong jammers, but we got caught up in that and forgot about them after the initial pass. This active offense definitely helped to get our jammers through, my concerns about this would be losing control of the pack, or not being able to swap back into defense quickly enough and the other jammer scoring points also.

Our benchies were basically the best ever, I’m pretty sure we would have just ended up getting bruised and busted if they hadn’t kept us focused on our goals. Crack was great at line ups and keeping the cool – it was total zen bench. I was really impressed with how well she got us back to her planned line ups. With injuries and penalty box trips, it must be difficult to achieve, but I always seemed to be looking at similar sets of Brawlers while on the track. 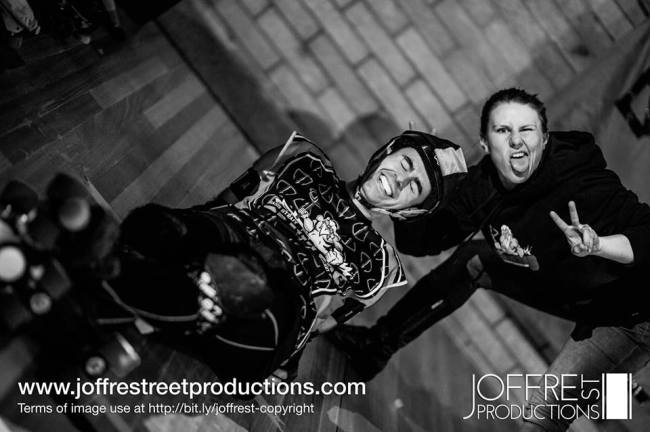 The final score was Brawlers 200 Scartel 124. I can’t wait to play more derby! Thanks to all my team mates and everyone who helped make the bout a reality.

Here’s some bout footage if you would like to watch! But it’s only the first half due to technical malfunction!