No matter your sexual preference, gender identity, ethnicity, color, religious belief or social status; you are welcome at the Pride Parade. A celebration of life that occurs annually in Longbeach sees thousands flock to the popular main strip to show their support for equal rights and a discrimination free work place.

Set amongst spectacular views, the parade lines up in preparation along a cliff leading down to the water’s edge. A sandy bike path runs along the beach; skaters and cyclists cruise leisurely across the beach, the breeze on their backs, the ocean their picture frame. A seemingly unrealistic compositional element completes their picture; in the water, perhaps one mile out are several large resort islands. However, the islands are not islands and the buildings are not resorts. The Longbeach bay contains oil refinery rigs just off shore, within distance of a triathlete or professional swimmer. Each island has been reworked into a functional place of industry, each part of the island being used for the delivery and processing of off shore material. Curiously, one could be fooled into thinking the islands were resorts, at first glance palms trees line the island and ornate buildings with pleasing lines huddle around a town centre. Looking closer, the buildings look more and more like hotel rooms and casinos, they all connect and function as you would expect of a resort. It isn’t until you see the large industrial boats lining the far side of the island that it becomes apart that not all is as it seems.

The Californian government placed strict regulations on the companies who wished to build refineries on the prime real estate. The design of the refineries were required to look as though they were a resort so as not to be an eyesore to the views. The architects and engineers set to the task of mimicing a resort and they succeeded in fooling more than one tourist. California’s industry is everywhere, be it automotive, mining, petroleum or one of the many lucrative sectors, you can see it all around, even in a beautiful beach side community the industry is present, if not obvious it is hidden. 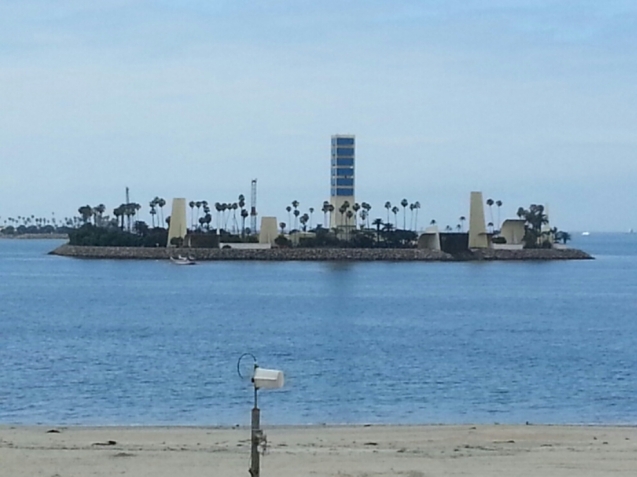 After passing the beach, the parade begins to wind itself through the city streets. An eclectic collection of floats and displays, featuring a myriad of costumes, personalities, signs and giant peacock hair styles that can only be described as a fabulous melting pot literally DANCES it’s way into the city centre. Thousands of parade participants wave the flag of whatever business, society or community they repesent to the upcoming audience who cheer their support passionately. The parade brings together people who would never otherwise meet, all walks of life are present to support to the cause and go on one wild ride doing so.

The parade is at once a deviant but safe environment; attendees are free to express themselves and dress however they like. This welcoming and friendly atmosphere lays the foundation for some very bewildering sights. Pride Parade attendees express themselves with elaborate costumes relating to a social type they identify with. In two minutes of the parade you may see; a large truck containing larger men in the tray wearing nothing but leather straps, women dancing with one another inside of a massive bubble aquarium on wheels, numerous combinations of half naked men and/or women bridled up and being and being reigned by their partner, an all male cross dressing singing and dancing cheer squad and latinos in hydraulic pumped convertibles blasting dirty beats out of sub woofers in their back seat. The parade is breathtaking and entertaining, a splendour of sight and sound that transcends daily life and provides and outlet of escapism for many.

The Pride Parade exists to support the rights of everyone, but interestingly the vast majority of people lining the streets of the parade may identify as straight. Many parade participants would also identify as such, but join to show their support to their fellow human; local business build floats and deocrate trucks to participate in the parade and have their employees join in, various community groups, sports teams and religious groups show their support in the parade. Perhaps most touching are two people riding scooters with matching signs on the back saying “Proud parents of a gay child”, additionally christian church groups who march in the parade with floats plasted with God for equal rights material. The Pride Parade is a positive environment, many could benefit from experiencing an entire community coming together to support one another, it promotes love peace and happiness.

Our new found Caifornian friends invited us to the Pride Parade to participate with their employers float, which was a large truck decked out in rainbow coloured fruit, cranking loud tunes and throwing T-shirts and stubbie holders – that yanks bizarely call coosies – into the audience. We were invited to skate along side the truck to deliver goods to the audience and pull off mediocre dance moves that happened to impress the onlookers. There are some memories that last in you mind and imagination; the Pride Parade is certainly one, the experience I had there was amazing. I have never seen so much love for fellow human as I did that one day, everyone was happy to be a part of it, strangers would hug you for no apparent reason and people just wanted to be involved in the celebration. Skating alongside the truck was an absolute blast we even met one of the Moxi Skate Team girls and were schooled by her skills and style. We will look fondly back on our day at the festival. 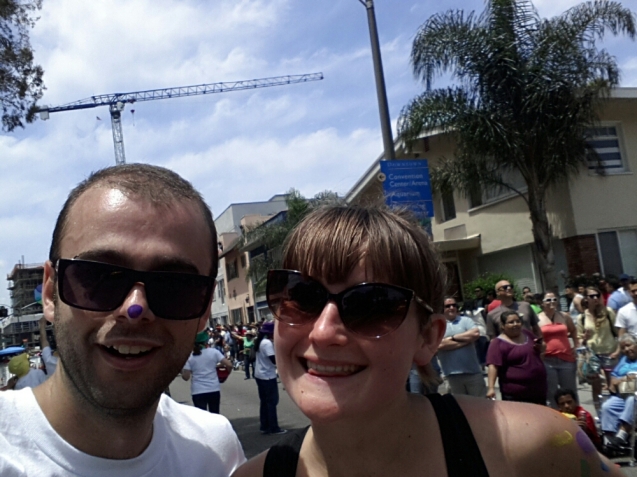