The following is a collection of photos taken at various events and locations in and around Seattle and Puget Sound during the month of June.

Battle on the Bank; June 5th-7th in Seattle, Washington saw several teams from all across the country compete in the annual event to determine who has the best skills in the fast and dangerous variation of roller derby. Hosted by Tilted Thunder; the event had a singular track that is on a harsh angle the entire circumference of the track. For those who haven’t seen a banked track, walking up it is comparable to walking on a children’s playground slide; when skating the track the speed of the bank gives you constant momentum which creates very fast game play. The hits are hard and the falls are harder, skaters slide from the very top to the bottom, coming to a stop on the concrete. With enough force skaters can be hit over the outside rail, landing on the ground six feet below. After three days of competition, the LA Derby Dolls took the grand final victory over San Diego.

It was a busy weekend in Seattle, on the other side of the city was the North West Pinball Convention. Over 400 pinball machines and retro arcade games were on free play; high score competitions, seminars and pinball building workshops took place all three days. Walking through the heavy convention centre doors and into the hall was a sensory overload; a physically noticable wall of sound and vibration rattles your bones the moment you enter, flashing lights disorientate your vision until it adjusts to the chaos of the regiment of pinballs arrayed like so may soldiers in neat rows. A myriad of pop culture, sport and history were featured in the various machines dating as far back as the 1950’s.

A perfect escape from the excitement of Seattle was the Olympic National Forest on the western peninsula of Washington. If you are looking for isolation, this is the place. The mountain range is home to one of the few remaining temperate rainforest in the United States, a beautifully dense forest where every tree is covered in moss. Bird calls and the running rivers are the only sounds. Small, discrete pockets are etched out off the paved roads where campers set up for a week of quiet fishing, hiking, reading or marshmallow roasting. 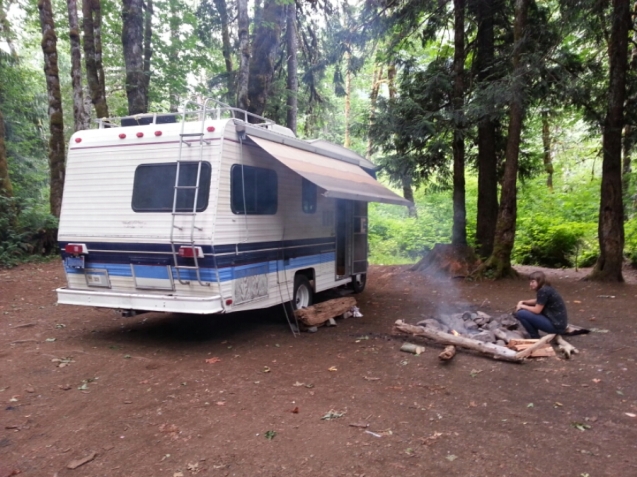 Lena Lake is an Alpine lake, only accessible through a steep hiking trail, the valley was once forested however glacial melting created the lake where vast trees once stood. When the water level is low, tree tops of an age long past eerily protrude from the surface, the underwater forest preserved in still life. 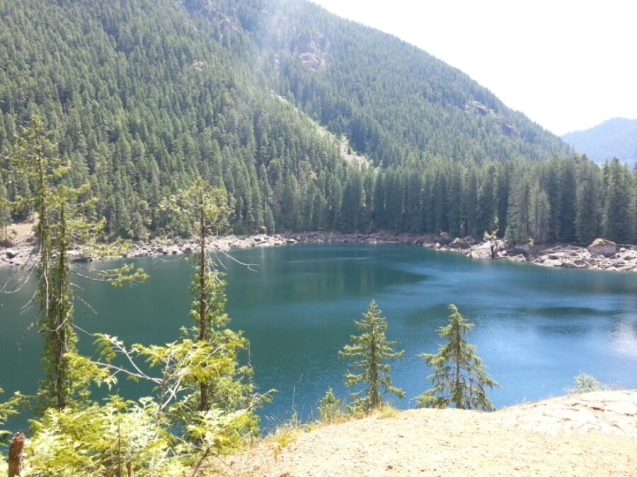 The California gold rush set precedence throughout the United States, therefore when gold was first discovered in Alaska, thousands rushed to the state, seeking their fortune. As the Puget Sound is the closest US port to Alaska, it became a base and place of trade for many miners; it was called Miner’s Landing. The Seattle waterfront, which is now a heavily tourism dominated area, proudly displays the Miner’s Landing museum. It’s exhibits include historic documentation and photography  of the Alaskan gold rush as well as providing insight to the life an times. 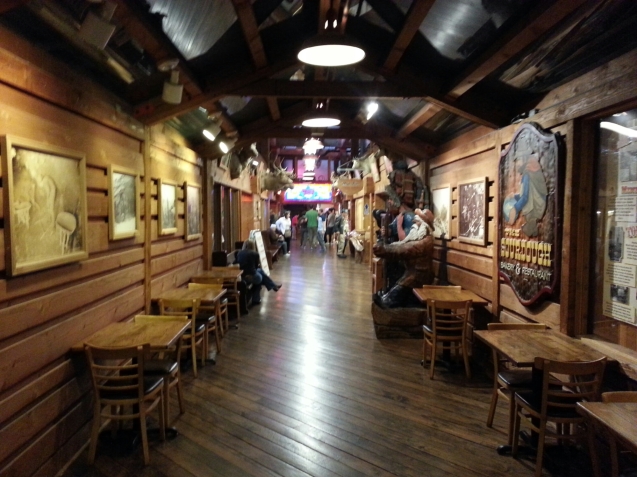 The latest public transportation proposition in Seattle is the Union Street Gondala. An informative display is set up at the waterfront, featuring one of the gondalas, which is the same design as the carriages on the Great Wheel that can be seen providing tourists with revolving rides from many vantage points in Seattle. The proposed system will connect the waterfront with the University of Seattle and the Convention Centre. Union Street is extremely steep, however the convention centre at the top has under utilized parking. Public transport in Seattle isn’t as efficient as other cities and there is often heavy traffic, by providing motorists with car parking out of the city centre will assist people’s daily commutes. The gondala system is incredibly efficient; it delivers a gondala to one of the three pick up locaions every eight seconds. Each gondala can carry eight people, making the daily esitmated capacity 50,000 passengers. In addition, the mechanical design utilizes gravitational forces to provide the majority of power top the system; the only other external power required is provided by  single engine about the size of a small family car. The information panel included a world map showing other gondala systems currently in use and also during various stages of proposal. South America and the most northern areas of Africa already have several operational system, interestingly Tasmania appears on the world map, presumably for the proposed Mt Wellington sytem.

As evidence of the steepness of the streets in Seatte there are companies which loan out goats for exteded periods of time to keep the nature areas under control. These areas are too steep for gardeners to maintain so the coucil actually erects fencing to keep the goats enclosed and then introduces a herd, which then proceed to eat everything within sight. 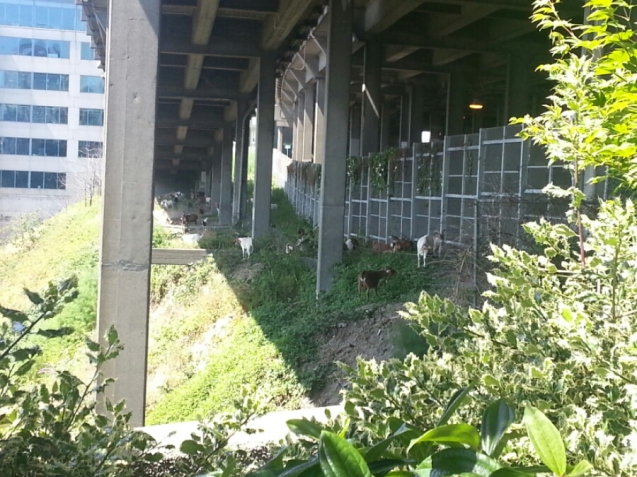 Certainly the most recognizable landmark in Seattle is the Space Needle; built for the World Fair, it serves no actual purpose except for the providing joyous 360 degree views of Seattle and Puget Sound. The one externally located elevator commutes many thousands of people up and down the needle every day, it travels at 10 miles per hour and takes 42 seconds to reach the top. In that time the ground beneath quickly vanishes out of view, yielding to the skyline of Seattle and the industrial waterfront behind.

The views from the top of the Space Needle are breathtaking, capturing many significant land types Washington is known for. To the south are alpine mountains, peninsula and then forest to the west, the east leads to agricultural land and to the north beyond is Canada.

On the West shore of Seattle is Alki Beach; a well-to-do area, but also home to many intrigues and exciting acitivities. The beach is alive with the character of locals and tourists; an array of unique contraptions roam the boardwalk and waterway, hired from vendors by various visitors. Longboards being propelled by street oars, six person pedal cars, scooter/longboard/bicycle hybrids and lycra clad roller bladers dodge and weave the pedestrians making their way to the beach for a bonfire or game of volleyball. The Admiral Theatre sits above the beach in West Seattle, built in the 1940’s and lovingly restored, the cinema now plays two movies a day using traditional projection equipment, which although doesn’t compare in quality to modern technology, has a certain old world charm.

The nights of Alki are as equally alive as the days; street bike gangs wearing broom bristles on their helmet do speed laps around the beach over revving their engine in a bid to draw attention, hundreds of hungry people line up at resturants or wait for their date at the beach and communities gather for various festivals and celebrations to fill the sky with a hundred floating lanterns. All this under the ever watchfu eye of the vigilant Alki Beach Parking Enforcement. All day and night the police car look-alikes patrol the streets and flex their authority whenever an unattentive motorist infringes a parking requirement. To someone who has been doing laps for fifteen minutes looking for somwhere to park, the Don Armeni boat launch is the seemingly perfect place to stop; two dozen gloriously empty parking spaces call to the driver, however the posted parking restrictions contradict. This area is reserved for the privellaged of us to be marine vessel owners, only vehicles with trailers are allowed in these parks. As night encroaches, people begin to pay less notice of the signs and the circus begins. Every night squads of parking enforcement vehicles are delpoyed to Alki to tackle the tide of would-be stationary vehicles at Don Armeni. In similar fashion to sheep dogs, the parking enforcement roll into the boat launch and annouce their presence with a flash of party lights and a blast from their speakers. “Everyone parking here without a boat trailer on you car are trespassing. Move along now.” is repeated through the speaker as the parking enforcement cars funnel the motorists out of the parking area. Once their task is complete, the posse of do-gooders disband and five minutes later the car park is full of motorists again. This nonsensical merry-go-round repeats in a cycle every 15-20 minutes until approximately 12.30am.

Puget Sound Outcast Derby are very welcoming to visiting skaters and are home to some of the most talented skaters in the world. The Men’s Roller Derby World Cup trophy is currently being circulated throughout the members of last year’s winners, Team USA. The next world cup will be hosted in Calagary, Alberta, Canada in July 2015 and although Team USA has not yet been selected, there are skaters amongst Puget Sound working towards it.

Roller Derby in the United States is a very different brand played to that in Australia, teams focus on different skills and strategies, often leading innovation that takes other countries a little while to catch on to. A priority in many leagues is the ability to plow stop. Every league teaches plow stops during their fresh meat, however some may not continue to make them a singificant part of their game as they develop other skills such as backwards blocking. Men’s derby is often very orientated around the hit or the jammer force out, where women’s derby is often more focussed on containment. Puget Sound is definitely making strong progression in their pursuit of jammer containment, their training, like highly ranked WFTDA teams, places strong emphasis on any forward facing blockers being able to provide very strong resistance against pressure from behind, which in turn relieves pressure and over compensation in backwards facing bracers. Being able to provide a strong edge against a jammer while presenting them only illegal target zones (back) creates a more secure wall than blockers providing resistance with their bodies sideways or backwards.

We had an outstanding time skating with Puget for the couple of weeks we spent in Seattle and would like to thank all the people who made us feel welcome. Skating with high level teams and individually inspiring skaters is assisting me with improving my own game and I look forward to crossing paths with Puget again in the future. 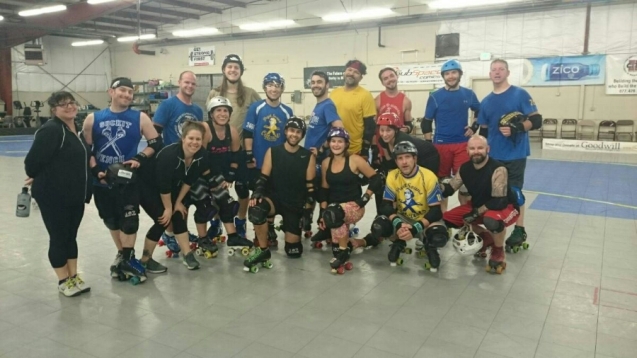